A celebration of Russian food for the 2014 Winter Olympics

I’ve had the most delicious and delightful time, exploring Russian food over the past month or so. I love ‘cooking on a theme’ and the upcoming Olympics in Sochi seemed like the perfect excuse to dive into a cuisine about which I previously knew very little. Well, after much research, cooking, tasting and recipe-writing, I still don’t know a whole lot about Russian food, but I am happy to present seven options, any of which would be a tasty treat to serve and enjoy while you feast on the Winter Olympics coverage on television.I recognize that they may not be 100% authentically Russian, but neither am I!  I’ll actually be making all of these recipes again and again – they are the winners from among the dozens I tried. I hope they fuel you well for cheering on your country’s athletes.

Sbiten, considered by some to be the quintessential Russian cold-weather beverage, traces its history back to the 14th century. Traditionally served up on street corners from heated copper samovars, the beverage fell out of favour as coffee and tea became more popular, but it is now enjoying a resurgence, thanks in part to its delicious flavour and healthful properties. While this recipe is non-alcoholic, it’s not uncommon to find “spiked” Sbiten in Russia, with vodka, brandy and even red wine being the favoured alcoholic additions. Sbiten can be enjoyed warm, at room temperature and even chilled. 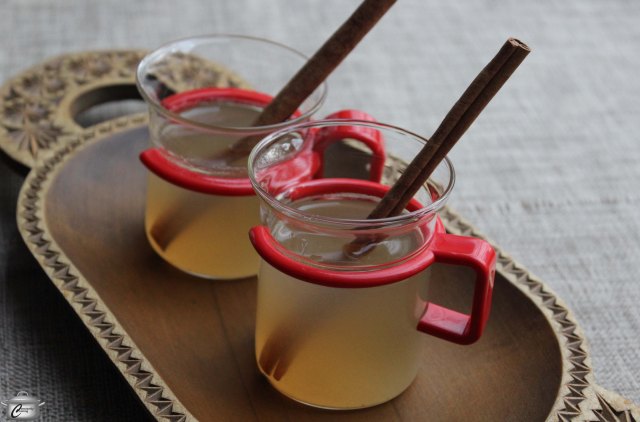 Popular in many Eastern and Central European cultures, Borscht seems to be one of those ‘love it or hate it’ things. People who do not enjoy beets are not likely to love this soup, but if you jazz up the flavour with lots of spices, as this recipe does, you may win over some of the fence-sitters. I love Borscht because of its hearty, earthy flavours and while I prefer to eat it piping hot with a generous dollop of sour cream, lots of people seem to enjoy it chilled as well. Many Borscht recipes call for the inclusion of beef as well as meat stock, but I like the bright, clean flavour of this vegetarian version. Serve with some dark rye bread and you’ve got a pleasing combo. If you aren’t sure whether your guests will enjoy this soup, I recommend using little bowls or even Asian teacups to dole out small portions. 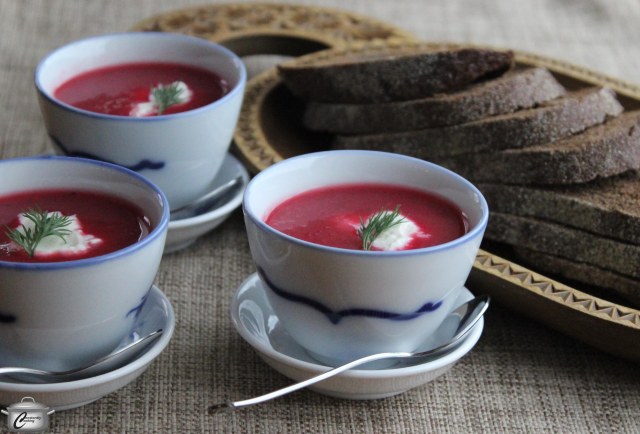 Borscht is hearty, flavourful and has a beautiful bright colour. Serve it with dark rye bread.

It’s no wonder so many good restaurants are making and serving pickles, preserves and chutneys these days – they brighten up the flavour of just about any dish and often add a nice pop of colour and texture on the plate. I have frequently joked that when I was growing up, pickles were a food group for me so when I recently saw a recipe from the U.S. Apple Association for pickled apples, I knew I had to start playing around. I’ve made a number of adaptations to suit my tastes; you could easily add more or different seasonings if you want a zippier pickle. Pickles are a mainstay on Russian tables; this recipe is a little different than what they might serve, but apples in this form are really delicious and pretty too.

I adore pickles of all kinds – it’s the seasonings that make these ones sing.

Meatballs are a staple in many different cultures and have been served up across the globe since Roman times. In Russia, Tefteli are popular as comfort food and are typically served with boiled or fried potatoes rather than with pasta as has become more common in North America. While most traditional Russian recipes suggest making very large meatballs, I like to make mine much smaller so they are easier to serve and eat. Rather than simmering the meatballs in a vat of sauce, serving them individually on tiny plates or Asian soup spoons makes for a much prettier presentation.

Blini – one of the most well-known Russian treats – are very small, savoury pancakes with a unique and appealing flavour. While some blini recipes call for yeast as a leavening agent, using baking powder instead speeds things up very nicely. Iron-rich buckwheat flour is – despite its name – not actually made from wheat and is gluten-free. If you are making blini for people with gluten intolerance you can either use all buckwheat flour, or substitute your favourite gluten-free flour blend for the all-purpose flour. Blini are the perfect vehicle for loads of delicious toppings; the most traditional in Russia are smoked salmon and caviar, usually with an accompanying dollop of sour cream.

More cookie-like than cake, these buttery, melt-in-your-mouth treats are known by many names, including snowball cookies, polvorones and Mexican wedding cakes. I’ve also seen them served up often as popular Christmas cookies in North America. Whatever their name and true origin, they are a popular tea-time snack in Russia. I like them as they are easy to make and not overly sweet, despite being twice-dusted with powdered sugar. You can use whatever variety of nut you prefer; while I love the flavour of walnuts, they are delicious made with almonds or pecans as well.

Reminiscent of shortbread, Russian Tea Cakes have a lovely texture and flavour.

What’s not to love about Pavlova? Meringue, whipped cream and fresh fruit – a perfect trio of textures and tastes – AND it’s gluten-free! Named for the legendary Russian ballerina Anna Pavlova, the dessert was purportedly first created in her honour during a tour of New Zealand in the 1920s. Unlike traditional meringues which are usually soft throughout, the inclusion of cornstarch in Pavlova gives it a crispy exterior and adds to its delicate texture. In the past I have always made larger Pavlovas which can be rather tricky to serve; by shaping individual or miniature versions, that problem is eliminated and the dessert looks much prettier too! 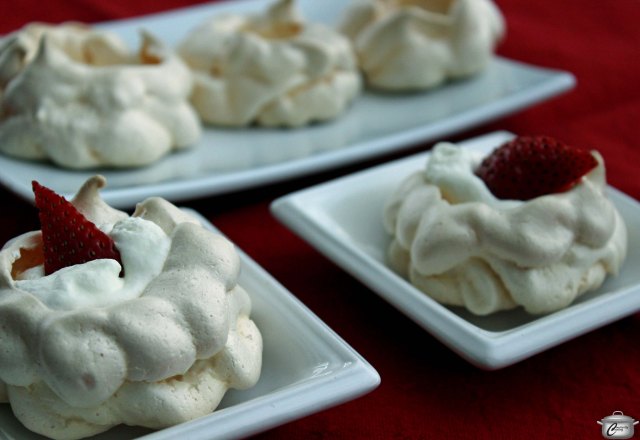 Mini Pavlovas are a fabulous dessert because they are beautiful, delicious and light.