To be honest, I didn’t exactly eat a car, but I did eat many delicious things that were made of the same biomaterials that Ford is using in automotive research and production. 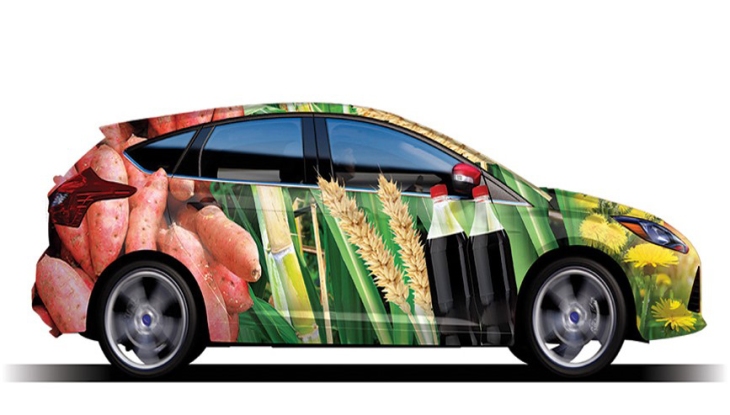 As food editor of Ottawa At Home magazine and an eager recipe developer, I was engaged to curate a menu for a Sustainability Breakfast that Ford of Canada was presenting as part of the BConnected Digital Influencers conference in Ottawa. The challenge I was given was to come up with recipes for dishes that used the foods and food by-products that Ford is working with and it’s been one of the neatest food projects I’ve ever worked on. I have to confess I was both surprised and impressed to learn of all the biomaterials Ford is using, per the infographic below: 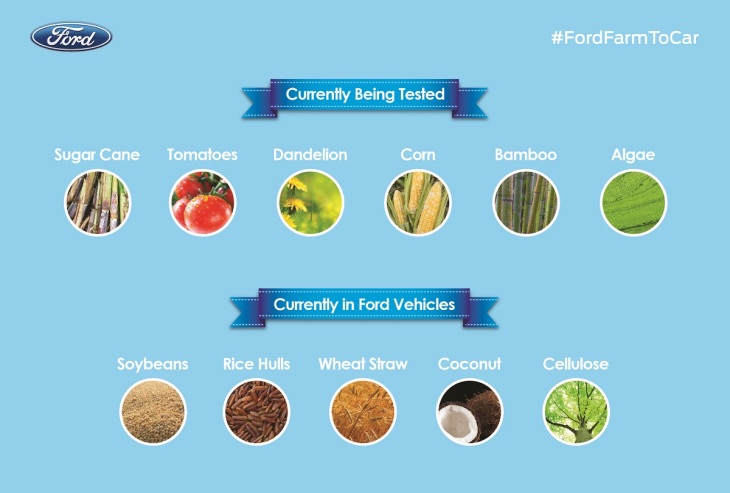 I had a lot of fun thinking about the theme of sustainability as I sketched out menu ideas and it got me thinking about my approach to food in general terms. To me, one of the most important aspects of sustainability is about making use of what you have around you, sometimes in creative ways. For example, clean-out-the-fridge omelettes are one of my favourite things to make. As an extension of this, rather than letting by-products go to waste, perhaps they can be re-purposed? With food, this might be something as simple as making a dish with beet or turnip greens in addition to preparing and serving the more commonly consumed root portion of the vegetable. The same concept is at the heart of the myriad efforts Ford is making towards incorporating sustainability into its production; the company is working hard with both farmers and scientists to find ways to use non-consumable biomaterials like rice hulls and tomato skins, to name just two.

As I was creating the menu for the breakfast, I also spent time thinking about how I didn’t want to simply include ingredients to tick them off a list. Rather, I wanted to apply some of the same principles as Ford, which is to look at creative ways to incorporate items you might not expect to find on your breakfast menu (or in your car) and present them in effective and appealing ways. I also included primarily gluten-free and dairy-free dishes as well a few locally-sourced foods (despite it being April), because I believe ecological protection and safeguarding human health – things Ford does with the safety and emissions aspects of its vehicles – are also key elements of sustainability. Here’s the menu card from the conference breakfast: 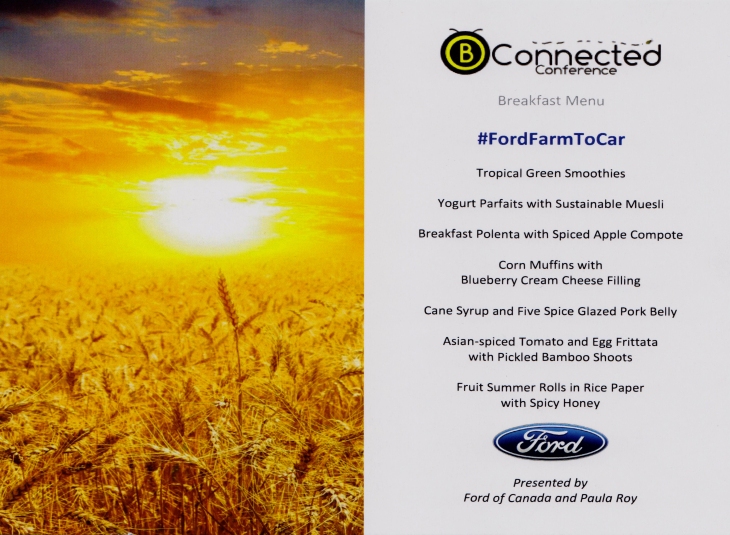 Curious to know more about the ways Ford is using biomaterials? Here’s a quick recap:

And here’s how the menu items made use of the biomaterials, in food form: 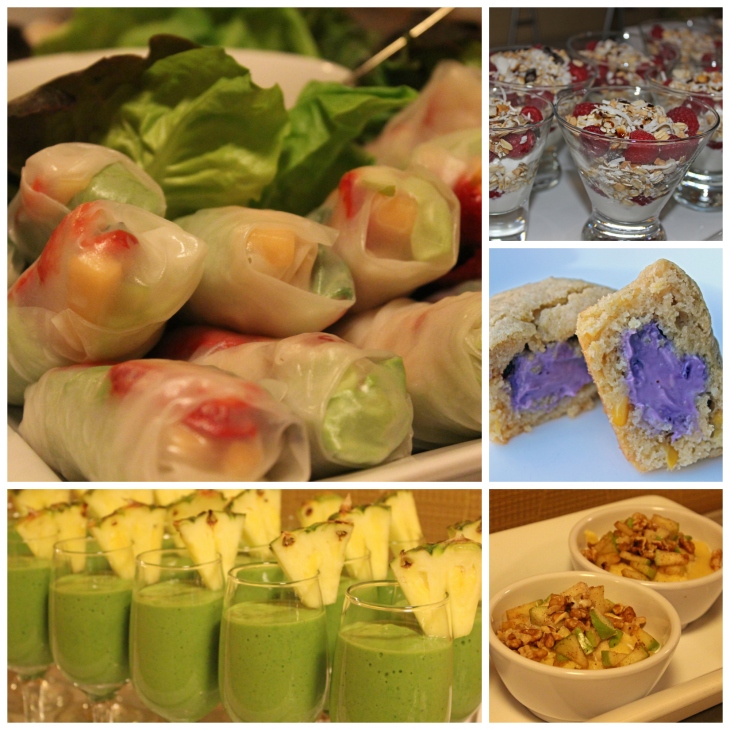 Tropical Smoothies – these contain cellulose, which is found in leaves such as the spinach in this morning’s beverage as well as algae, in the form of Chlorella powder; it’s a nutrient-dense superfood touted for its detoxification properties.

Breakfast Polenta – this is a twist on traditional oatmeal porridge or the now-popular steel cut oats. I’ve added in maple syrup to the cooked cornmeal for a local element, but you should also know that locally-grown cornmeal and corn flour is available from Barkley’s Apple Orchard which sells its many products at the Ottawa Farmers’ Market. I couldn’t stop at one dish with corn because it’s such a versatile ingredient, so I used corn flour and canned creamed corn (really!!) it in the muffins, with local blueberries in the cream cheese centres. This dish also uses wheat, one of Ford’s biomaterials; it’s the only item on the menu that is not gluten-free.

Fruit Summer Rolls – I thought of many different ways to incorporate rice and realized that rice paper might be fun and unexpected. Since most breakfast buffets include fruit salad, I decided to stuff it in rice paper wrappers for a delicious twist.

Yogurt Parfaits – featuring a coconut muesli from an initiative founded at Ottawa’s most innovative food bank, the Parkdale Food Centre. The project has allowed 15 youth to launch a food-based social enterprise called The Muesli Project. It’s a one-year opportunity for these kids to start, run and grow their business with the help of expert mentors. At the end of the venture, any profits will be distributed among the youth for further education and/or to start their own business. That’s my kind of sustainability!

Egg Frittata – when I looked at ways to incorporate tomatoes, I thought of frittatas and then realized that adding an Asian flavour profile could be fun because you don’t typically see that; it made a natural tie in for the pickled bamboo shoots.

Pork Belly – I’m a big fan of pork belly and we have beautiful Heritage pork produced throughout Eastern Ontario. When I saw soy and sugar cane on the list of Ford biomaterials, I knew right away these two ingredients would be glazing some slow-roasted pork belly; it’s a nice change from regular bacon.

Here’s a recipe roundup in case you want to taste some of the items (more links to follow as the recipes get posted).

When Matt Drennan-Scace, Ford of Canada’s communications manager, and I presented at the BConnected breakfast, it was great to hear many in the audience express their surprise at these unexpected innovations in research and development. I was grateful for the opportunity to talk briefly about the recipes I developed and have to confess it was kind of a thrill to see the food spread out on the buffet table and then watch a room full of people eating my menu! Check out the hashtag #fordfarmtocar on twitter to learn more. 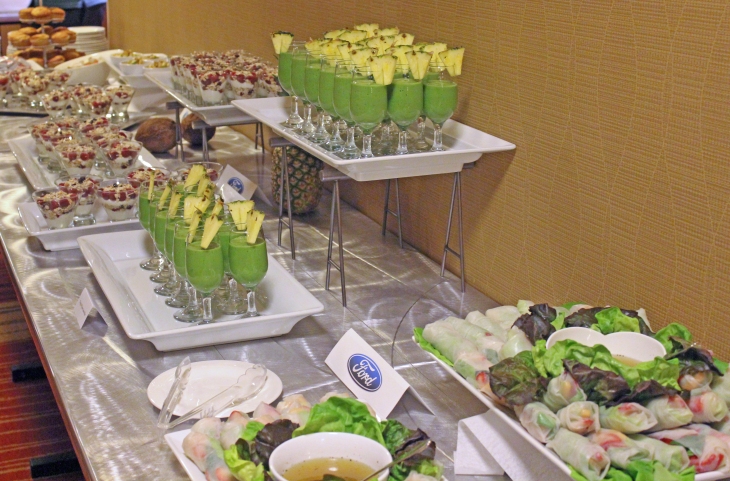