The quest to taste a uniquely Canadian treat continues!

We got an early start on our second day on the Kawarthas-Northumberland Butter Tart Tour so we could pack in as many sights and tastes as possible. Our first stop of the day was Fenelon Falls, just 13 kilometres from our comfortable accomodations at Eganridge Resort. Fenelon Falls is situated at the intersection of Sturgeon and Cameron Lakes an is home to the Trent-Severn Waterway’s Lock 34 which provides safe passage for boats, thereby avoiding the nearby hydroelectric dam and waterfall. Dubbed the ‘Jewel of the Kawarthas’, Fenelon may be small (year round residents number about 1800) but it has loads of charm. 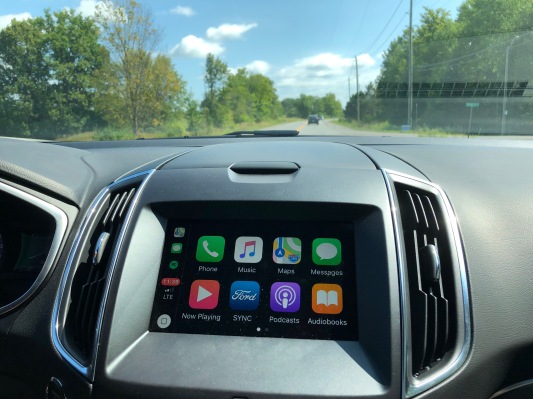 As on day one of this road trip, I was glad for the Ford Edge’s Apple CarPlay capability  -something I’d not experienced before – which made it super easy to connect my iPhone to the vehicle. Once connected, the vehicle’s display screen enabled me to use familiar touchscreen icons or Siri voice control to access a wide range of functions from my phone, including maps and navigation, sending and receiving texts, making calls, listening to music and more. Naturally, we had to find a butter tart right away before checking out any of Fenelon Falls’ other attractions. We found a splendid one at The Little Pie Shack, housed in a bright pink building decorated with cheerful food-themed murals. 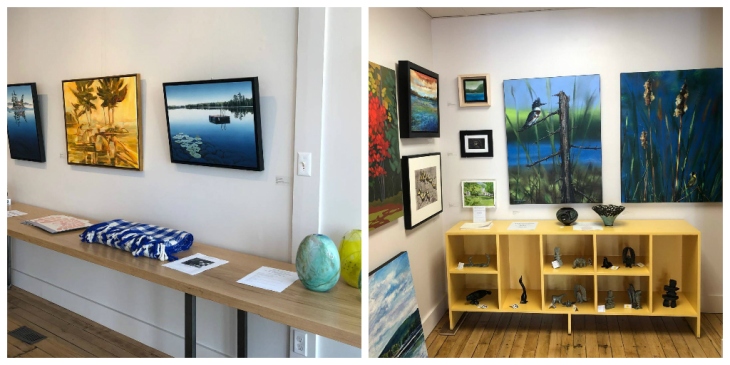 Once our sugar levels were restored, we ventured into the nearby Colborne Street Gallery, a member of the Kawartha Lakes Arts Council and the Arts & Heritage Trail. The gallery is home to a beautifully-curated collection of contemporary art, including painting, drawing, photography, sculpture, fibre, and mixed media arts with many pieces having been created by artists from the Kawarthas and surrounding area. 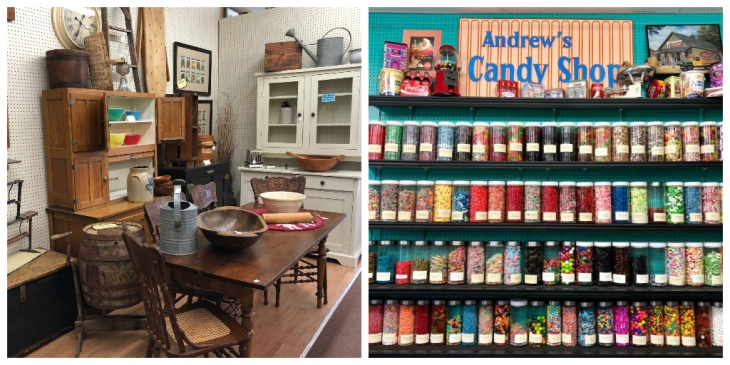 We were happy to wander into the eclectic Grr8 Finds Market just up the street; it’s a multi-vendor market focusing on antiques, collectibles and home décor items, stocked by over 50 vendors and 900 consignees. The proprietor, Randy Meredith, was a great ambassador not only for his shop but for the whole town. We particularly enjoyed perusing the gorgeous old-time candy store display at the front of the market and can’t wait to return when we have longer to browse. A walk by the locks and the famous falls rounded out our visit. It was exciting to watch the large Kawartha Voyageur cruise boat pull up near the locks and disgorge its passengers who were on a five day excursion along the Trent-Severn waterway. As at all the other locks we visited, scores of locals were perched happily on lawn chairs in the shade, watching all the comings and goings on the water. I thought it wonderful that the marquee from the old Fenelon Theatre (1948 – 2016) has been restored and relocated just outside the Visitors’ Centre by the locks. 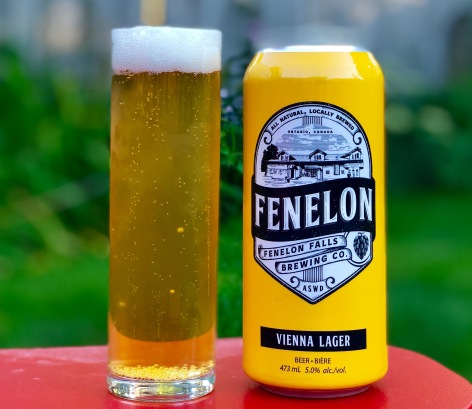 We were just a couple of days too early to enjoy the opening of the Fenelon Falls Brewing Company Bottle Shop; the historic building this 15 month old company is refurbishing will eventually house a taproom, event space and a street-side patio. 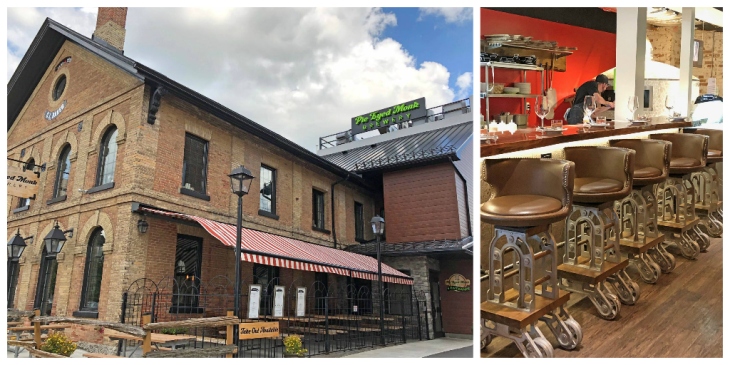 Thankfully, our next journey was to Lindsay, Ontario where we stopped in at the one year old Pie Eyed Monk Brewery. There, we enjoyed sampling a few beers including Blasphemous Rumours (my favourite), Monk’s Madness and Dirty Bird. They are clearly having fun experimenting with different styles and flavour profiles. The beautiful building that houses their brewery and taproom is warm and welcoming; it’s easy to see why it’s quickly become popular for events including parties, weddings and more. On our next visit I’ll be eager to linger on their patio sample some of their menu, particularly their wood-fired pizza.

We lunched instead at Boiling Over’s Coffee Vault, a tranquil space – formerly home to a bank – that offers a full range of typical café beverages plus delicious iced tea lemonade (it’s also licensed). Our multigrain croissant sandwiches were fresh and delicious and our only regret was that they had sold out of butter tarts that day.

Thankfully, the cute Corner Bites Eatery across the street saved the day. I devoured their pecan tart while my husband inhaled his raisin tart; both had the ideal filling to crust ratio and very flaky pastry. Based on the deliciousness of their butter tarts, I am eager to return to try their meat pies.

As we drove through these delightful small towns we both remarked on the Ford Edge’s fuel-saving auto start-stop system which functioned very effectively. The engine turns off automatically when you come to a full stop then restarts immediately as soon as you take your foot off the brake. I’ve read it improves fuel economy by as much as 6 per cent in stop and go traffic (not that we encountered any of that in the Kawartha Lakes). 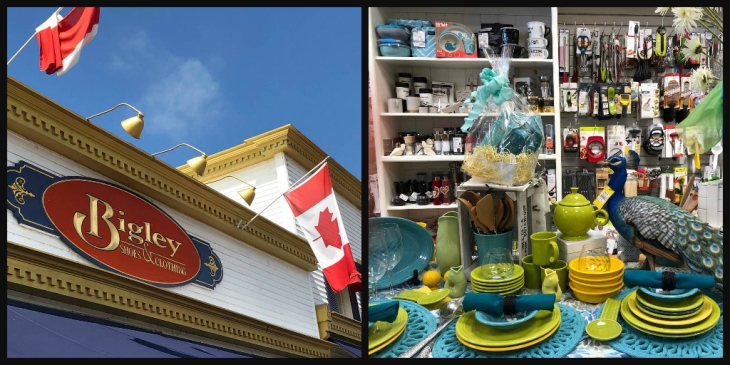 As we were passing through Bobcaygeon on our way back to Eganridge, we decided to stop in and visit the renowned Bigley Emporium. Bigley Shoes & Clothing has been a family run business since 1911 and has an enormous selection of clothing, footwear, bathing suits, jewellery and accessories for men, women and children, spread throughout several interconnected storefronts. I particularly enjoyed browsing through Bigley’s Cottage Kitchen which was full of the latest and greatest in kitchenware and gadgets. 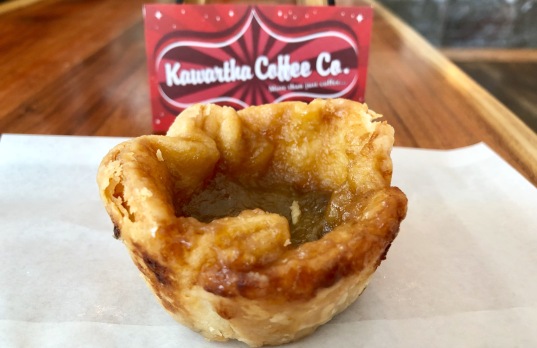 When we realized we had only had two butter tarts thus far that day, we knew we had to duck into the Kawartha Coffee Company to add to our tally. Their tart was terrific, particularly as it was generously filled.

Our evening’s activity saw us driving along the shore of Pigeon Lake to find the Lakeview Arts Barn (known as the LAB), about 15 minutes from Bobcaygeon. It is a live theatre venue housed in a refurbished cattle barn which includes a comfortable 150 seat black-box theatre with an adjacent bar and dining area. The LAB is part of the Kawartha Lakes Arts and Heritage Trail plus the Ontario Culinary Tourism Alliance’s Feast ON program.

Globus Theatre, founded in 2003, has been the company-in-residence at The LAB since 2006 and offers an engaging, diverse professional summer season plus an eclectic mix of dramas, murder mysteries and comedy nights at other times throughout the year. We were fortunate to be attending one of the last performances in the eleven day run of the hilarious ‘spice of life comedy’ Kama Sutra, written by Globus artistic director Sarah Quick and Peter McGarry and brilliantly performed by Sarah and her husband, artistic producer James Barrett.

The dinner which preceded the show was lovely and well-paced, with the cheerful serving staff capably managing the difficult feat of serving a room full of diners who were all seated simultaneously.

Driving back from the LAB, it was amazing to look up (I was the passenger, I promise!) and gaze at the stars (OK, let’s call them constellations) through the panoramic sunroof. We both really appreciated the auto high-beam headlamps on the Ford Edge which shine brightly when no vehicle ahead is detected and dim automatically when there is someone ahead or approaching. In addition, the headlamps emitted a super strong, clear light which made it so easy to see the road ahead and watch for deer on the sidelines (which we did see).

As we travelled throughout this busy day with ease in a comfortable vehicle on modern roads, I couldn’t help but think of the area’s initial settlers in the early to mid-1800s who endured such hardship to tame the land in the Kawartha Lakes area. I thought particularly about Susannah Moodie (whose book Roughing it in the Bush I am eager-to reread) and her sister Catherine Parr Traill (who wrote the similarly enjoyable The Backwoods of Canada). I wonder what they would make of this region now? Surely they’d approve of all the butter tarts.

Click here to read part 1 of this road trip recap.

Are you interested to try a great twist on the classic Canadian butter tart? 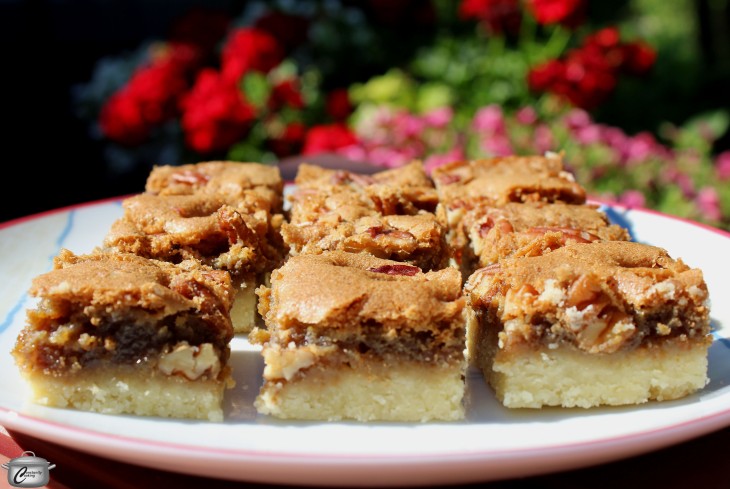 Disclaimer: We were guests of Ford Motor Company of Canada and Kawartha Lakes Tourism but all opinions, as always, are our own.