Some people think January is like ‘lunchbag letdown’ after all the food and fun of the festive season. Au contraire, my friends – there’s a special annual event set in our coldest month that will lift your spirits, nourish your body and help a wonderful organization at the same time. The cause is Ottawa’s Harmony House; the fundraiser is called The Red & White (think wine, people) and it’s part food theatre, part tasting fair and 100% fantastic. 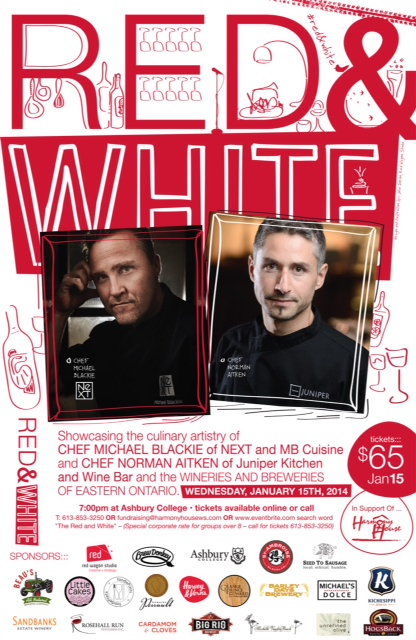 The Red & White is taking place this year on Wednesday, January 15, 2014 at Ashbury College. The event features the culinary wizardry of two of Ottawa’s most talented and beloved chefs: Michael Blackie of NEXT and MB Cuisine as well as Norm Aitken of Juniper Kitchen & Wine Bar. The evening starts at 7 pm and includes all of your food and beverages for the evening – a bargain at $65, no?

The exciting part of The Red & White is that the food isn’t simply served up for happy guests to devour; instead the Chefs, both of whom are generous, gregarious and pretty darn funny, will first showcase how the dishes are prepared and offer some expert tips and tricks for us home cooks. It’s like the best food television you’ve ever watched, except it’s live, so….anything might happen!

Along with the cooking demos and tasting stations featuring both the chef’s creations as well as products from other great local food purveyors, you’ll also get to sample beverages from myriad Eastern Ontario breweries and wineries. Did I mention there will be cupcakes as well?

Harmony House is the only second-stage women’s shelter in Ottawa; for 25 years, it has provided safe, affordable transitional housing for women and children who are survivors of domestic violence.

While they last, tickets for The Red & White are available here or by calling 613.853.3250. New this year, discounts are available for groups of eight or more, so gather up your friends, co-workers or neighbours and please join me for fun and feasting in support of a very worthwhile cause.